I think it was DH Lawrence who wrote a passage about just being on the road is enough. It’s not so much the destination that leads us on but rather the act of moving on to somewhere new. A new beginning each time we pack up and hitch up and check everything twice and drive off over the next hill toward another adventure.
We reveled in the journey across the desert from Great Basin, as the Sierras finally came into view and the view changed first to the Jeffery Pine forests near Mono Lake, and then suddenly we’re going up Tioga Pass along the Tolumne Road into Yosemite. 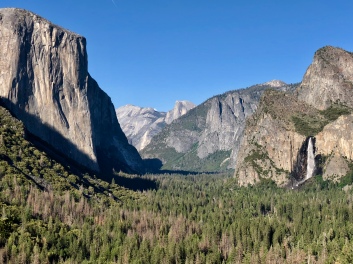 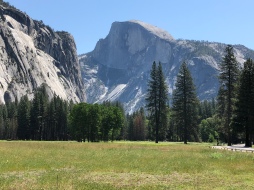 Words don’t describe Yosemite. Suffice to say that we saw everything again and it’s still unbelievable. Its early enough that the Falls was full. I was surprised that from 2000” feet below it was entirely silent.

From Glacier Point the whole world seems to be carved out of one big granite rock. We spent hours riding bikes in the valley, and got sidetracked with a group of others passing around binoculars as we gazed at the El Capitan climbers hardly visible with the naked eye. We had to drive into the valley to get cell reception for Jennifer to work, so despite the crowds in the public parking lots, we’d unload our bikes at the Majestic Hotel, make lunch reservations and let that shady lot be our home base.
When it was time to move on we were ready. We drove through the fire damaged Stanislaus N Forest. 90 miles on, the hills fell into the Modesto Valley where irrigation water is the most treasured possession. Later we crossed another beautiful grass covered range at Pashito Pass and got our first glimpse of Monterey Bay. Glad to be moving on to tomorrow’s adventure.