Another beautiful drive from Pagosa Springs, through the fine friendly town of Delores, then up the Delores River and across a pass in the San Juan mountains, and we descend into Telluride. 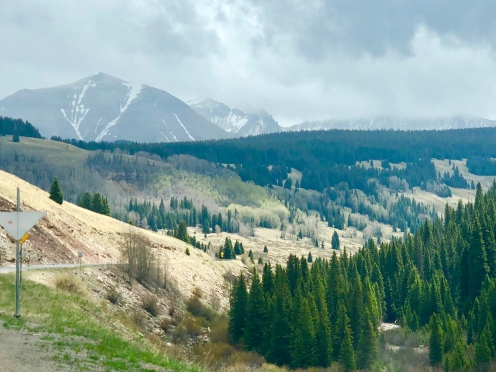 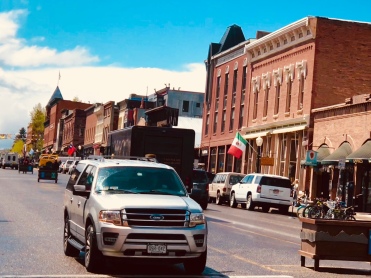 We were hoping to land a favored site at the city park campground and as luck would have it we slid into just about the last spot as campers were arriving by the minute. We were unaware of MountainFilm Festival starting the next day. Telluride was one of the most fun camps we’ve had.
The town itself is entirely walkable from our camp. Jennifer loves the unique shops and the localized design elements, while I read up on the mining history of the place and come across the first bank Butch Cassidy ever robbed. 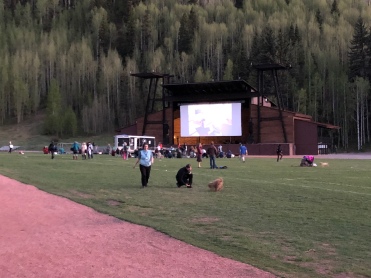 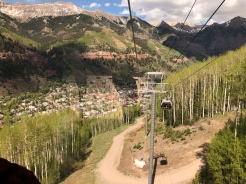 Every night after the baseball games are over in the park we watch movies on the lawn with a hundred or more others. There’s always some writer or director or maybe the subject of a documentary who introduces the film and gives interesting anecdotes about making it. While there are certain ticket holders who get to vote on every aspect of the films, sitting on the lawn with our dogs and our wine we simply enjoy the kindred spirit of those lucky enough to sit under these stars in this amazing place.
There is another great conversation at every turn. We meet a couple pulling a 30+ foot airstream they bought for a couple thousand in Tennessee, who are hoping to make it livable once they reach Idaho. We make an arrangement with a guy named Nathan Ward, so that he and his wife and son can get our campsite when we leave. Nathan directed and filmed one of the movies that had won an award earlier, and we end up watching it and talking to him about that and about film making in general. {Gritandthistle.com.} Chats on the gondola, dog talk in the park, everyone here seems ready to tell a story or to hear yours. 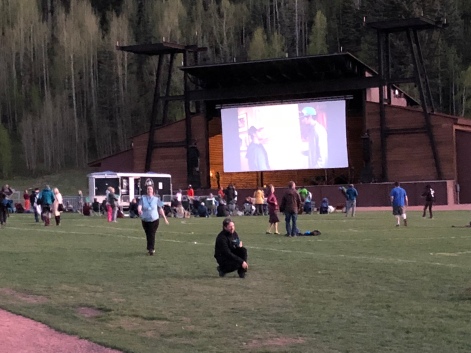 I’m not sure whether it’s a particular characteristic of Telluride, or whether after eight weeks on the road it’s a progressive condition, but somehow after 36 years doing what I do, I feel myself beginning to appreciate people a little more without the need to evaluate and classify them. I’m either due for some remedial legal training, or else the worm has turned and its time to find someone else to be.
I’m thinking about a ponytail.